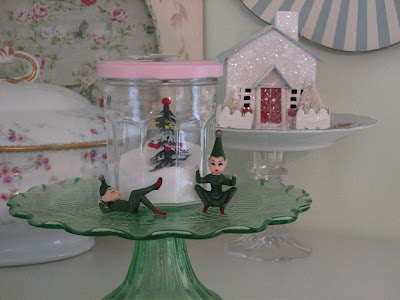 In my house we all like Bonne Maman strawberry preserves. Not only are they delicious and very much like homemade but they come in wonderful, sturdy little jars with red and white gingham lids. Being the mom of boys, I never throw away a good jar. You never know when a bug might need a home, right?

Bonne Maman jars can be found in almost every room of my house. A virtual I-Spy of glass and gingham. In the kitchen they hold sugars; in the playroom-googlie eyes and pom poms; in the girly office-craft odds and ends; just to name a few uses and places. I have even tinkered with some of them (shown below). 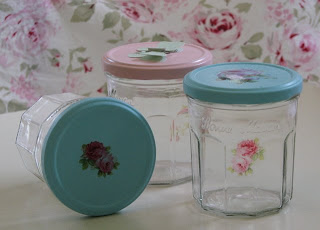 On Fridays I have office hours as a communications consultant and a sweet coworker brought in cupcakes for everyone (thank you, Isabel!). Probably the prettiest cupcakes I have ever seen. Each one was frosted pale blue and topped with red and white sprinkles, a snowman ring, and GASP a tiny plastic tree. I had to have a tree! (But did I really have to eat the enormous cupcake? File that under: Resolutions '09 post)

Back at home with my little tree, I set out to display it. A-ha! I will put it in an empty Bonne Maman jar (lid spray-painted pink) and add a little salt. A few saved elf cupcake toppers later and we have a whimsical vignette (and a lengthy post)! 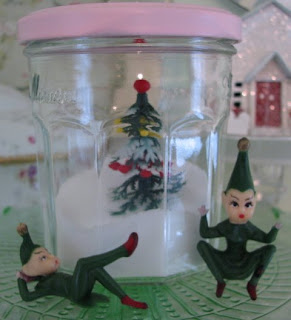 I love your idea! I just made a pseudo snow globe out of one of these little trees.
Karla

What a great idea. Love that sweet little decoration, little elves are so cute.
xo Lidy

omg, only you would be so creative!! what an adorable idea!! those elves are too cute too!

I love Jam jars too, but never thought of the re-use idea, I love that! I love the Ball Jars too and now I have some ideas! ;) Thanks sweetie!!

LoL! There you go again being sooo darn creative! Love the idea!!! I must confess I too collect jars-so many uses for those babies!
~Big Giant Smiles~Tam!

I too savor those jars! Love em!

This is too cute for words. I've never seen cake toppers like those elves. Almost as cute as your ballerina!

Well I agree with all of the comments above, they are the cutest little jars~ever! I love the tree in it and those elves are adorable! I am going to have to do this! Uh oh you started another trend, I see Cynthia left a comment, first the table now the jars, who will be the first to post this time, LOL, I have pink paint and jars!! Be right back! LOL. Merry Christmas & Hgs~Kelly

The snow jars are so adorable- how I would love to have such creativity!!!

Just a little something from Judy said...

I just discovered this blog, and I am so thankful that I did! It is like sitting down with my favorite magazine. I know that I will return many times. I love the idea of the jar with the tree and the salt. I love new ideas. Thank you!

another great idea - you are full of them.
I LOVE those jam jars who wouldnt love the red gingham lids, my Mum always has a jar or two in her pantry!

I love it!! Sometimes, I think I creatively re use things and then I see your post and BING a light goes off....I have a red and white kitchen...why don't I save those jars!!

I love the salt vignette! Might have to go home and make one of those myself!!

Thank you sooooo much for the sweet award. I will love dressing up my blog with this. You're so sweet!!! I love your blog too.

Such a cute idea! Just found your blog today and I'm so glad I came. Can't wait to read more -- you have a great eye! Love it!
~Angela :-)

What a cute idea and sweet post! Those little elves are thrilled you made that just for them!

You are too funny! I'm lovin' Lazy Elf -- wish I could be in his curly-toed shoes right now!

Just a little something from Judy said...

Believe it or not, I just returned home from the grocery store this evening, and while I was there, I thought about you. It was when I was looking at the Bonne Maman jars, which made me remember how cute you had made them look. Imagine my surprise, when I returned home and saw that you had visited my blog. Thank you! I really do like your jar creations.

I will never throw away another jar! Great idea!!! I love saving old jars to use as containers to give Christmas cookies in.

Soooo cute, of course I adore these! Thanks you for sharing, and for stopping by the bake it pretty blog! Happy New Year!