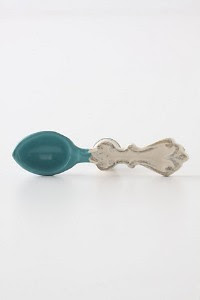 Ever spend time at someone's house and it gives you the urge to try new things around your own home? It happens to me when I visit blogs and it happened recently in person after visiting Christine Chitnis' (Lavender and Limes) very cool home which features lovely blends of patterns, textures and tones, as evidenced in this shower curtain below with which I was instantly smitten! 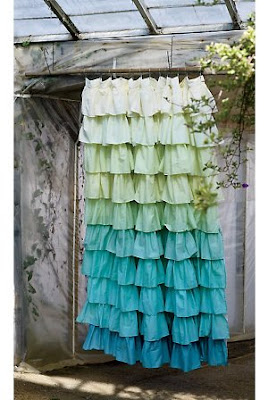 Yep. Smitten with this Flamenco Shower Curtain from Anthropologie. I began to rationalize ... 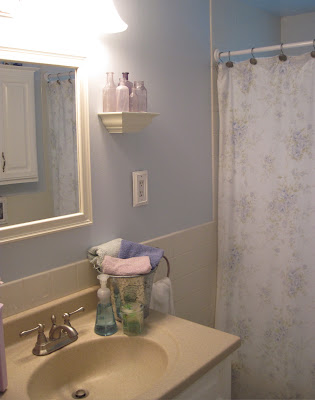 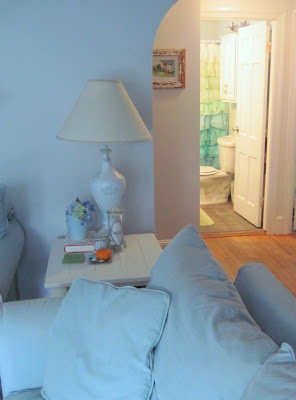 Today I headed to Anthropologie where there was only 1 left in aqua (surely a sign). While clutching to the shower curtain (mine!), I also found these Spoonful of Sugar knobs on clearance.

On to the small cabinet they went ... 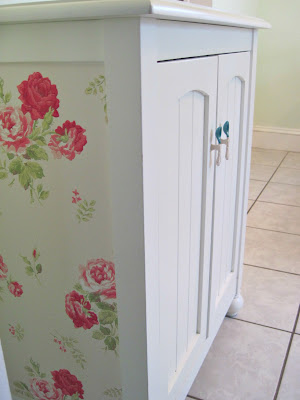 Which of course, kicked off moving around furniture. 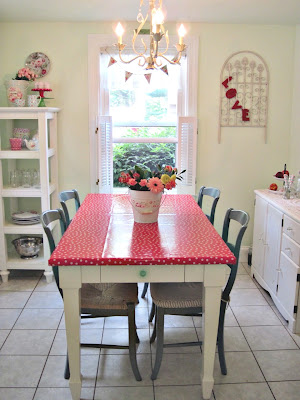 The dining room is generally set-up like this and it's pretty tight. 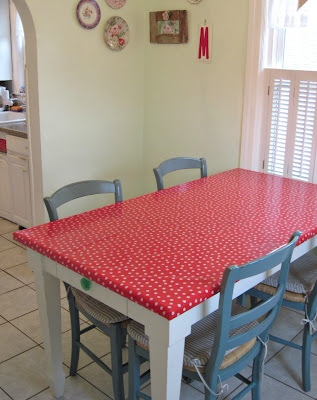 Experimenting, I pushed the table against a window/wall, diner-style. 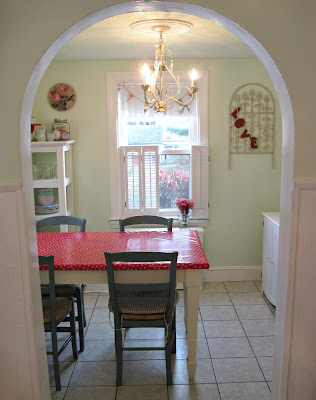 It's a little different but it just might work. 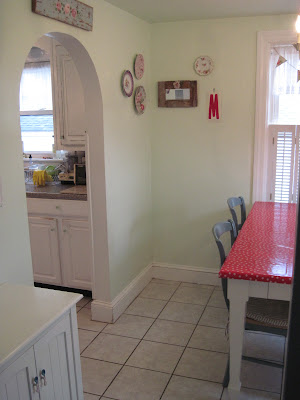 I've been home alone today and am curious to see what everyone will think about these little changes, purchases and rationales! :)

I think we all need days like you had today... you got to buy some pretty new things and then play around in the house rearranging and tweaking by yourself too! Sounds like my kind of day... :-)

So extremely pretty, and your old AND new shower curtains are right up my alley.

Your home is so spare...very refreshing. Now I want to re-arrange some furniture myself. :)

Wow, those knobs are great and I love the look of your dining room. Great job! Kit

I just love seeing pictures of your home. I can't wait to see the shower curtain in place. I love rearranging thinks and think your red topped table (which makes my heart sing) looks great in its new spot!

I like the all the changes you have made! In fact I just might sew mw a shower curtian like your new one!
I need a day like you had, buy a few pretties for my cottage and then rearrange the furniture, no one home,but me!
Blessings!
Rhonda

Oh I love the shower curtain(s)-both of them actually! I kind of like the table in front of the window. It does remind me of one of those old diners. How did everyone like it? xo Diana

Elyse, I love your kitchen! I hope setting up the table against the window diner-style buys you some space. It looks adorable that way, too!
Those knobs are so stinking cute! and don't even get me started on that beautiful shower curtain!!!
We are house hunting, and when the time comes to decorate, I am going to pull up all of your starred posts (on my google reader) and gather some inspiration.
I hope you are enjoying your weekend.

I have that very same shower curtain and absolutely love it!! Love the changes you've made!

I love that shower curtain...Yep. one thing leads to another!

it looks great...i love the table up against the window diner stye...very cozy! glad you got he cute shower curtain too. i have never seen those pulls at anthropologie, and i always stalk the hardware area there! they are super cute.

I believe in signs, oh yes I do! I'm so In love with your new shower curtain-- it looks so wonderful!
I love how you moved your table. Sometimes it just feels good to move things around, doesn't it?
Hugs,
Jill

I think you've stirred things up very nicely! Love the new shower curtain, it makes your bathroom look so bright and pretty. And the dining room looks beautiful too!

Love the shower curtain. Beautiful colors! And the knobs are perfect for your house. Enjoy the new look.

Good thing we have to listen to our big sisters! ♥

Happy dance...I love your new shower curtain dear one...LOVE it! Your home is just so darling...I want to move on in. Happy new week to you...xoxoo

Your home is adorable and I love the spoon handles!x

your home is sooooo homey and cheery!!!!

Hi Elyse,
That shower curtain is really wonderful. I love Anthropologie. I stopped by your friend's blog and was smitten myself.

It's always fun to change furniture around. When my husband used to go on long trips I used to change everything around. Then when he returned he would change it all back. He hates change.

Have a great day.

love the curtain! and change up. your home is sweet.

I think it lends an air of sophistication! Lovely~

Love all your little changes Elyse! I am always moving and changing things around here too! Have a wonderful Thanksgiving sweetie!

Elyse, I know exactly what you mean - your blog inspires me constantly!
Love the light and air in your home, and love the changes too. If it is functional for you, then it's good.
Sandie

The perfect day! You get to put up all the new goodies, and arrange furniture to your hearts content. I'm sooooooooin love with that shower curtain. I LOVE your house! =)

Hi Elyse~
It looks perfect! You cant go wrong if your older sister says go for it, right? Love the knobs too.

It was a meant to be day for you, Miss Elyse! LOVE the frilly shower curtain - so girly and so cute!! The handles are perfection and the icing on the cake to your cabinet.

Your cottage looks so adorable! Girly, I am so proud of you and giggle when I get my RH magazine and see your articles. YOU are living my dream job. Now you are styling? How F-U-N!!!! Any openings? :)

Everything looks pretty. How fun to have a new shower curtain and charming knobs. :0) I too am inspired by others blogs. :0)
Have a wonderful week.
Sincerely. Trish