If you follow my blog you may know that while I love to promote and support small businesses, I don't often do product placement pitches for large companies (although, if anyone wants to offer me a shed, I'm in!). However, since 2011 I have been happy to host giveaways for NOVICA. 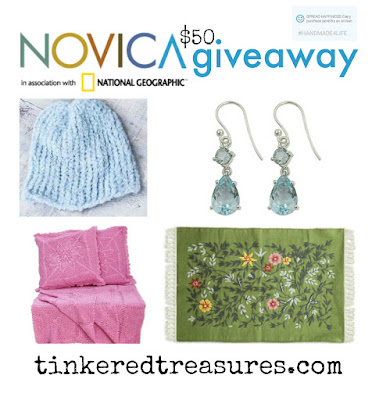 NOVICA is one of the leading fair trade artisan websites. They work with National Geographic to give talented artisans around the world a place to express their artistic talents and provide access to the world market. 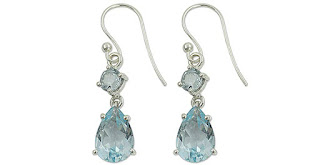 NOVICA has generously offered a $50.00 gift certificate for me to give away.

Thanks so much and good luck!

UPDATE: November 24, 2015
The giveaway is now closed.
Thank you all for taking the time to enter and share!
Using Random.org the winner is sandyhills x

I love their home decor department! Please enter me, merci!

I liked and followed you on FB:)

I'm now following you on Pinterest, please enter me, thanks!!

The home department is an eclectic mix of beauty!

What a wonderful giveaway:) I love the jewelry, earrings are SO pretty! Have a blessed day dear Elyse, HUGS!

The jewelry is beautiful and unique. I've bookmarked their site to do some Christmas shopping later. Thanks for having a fun giveaway!

Probably the earrings/necklaces- I love fun and funky finds!

I love their ponchos!

I love the tabletop like the glassware.
msgb245 at gmail dot com

I love the jewelry department! So many beautiful things!

Probably home décor but lots of eye candy. Thanks for the opportunity to enter the giveaway.

Oh I would say the Jewelry Necklaces! They have such beautiful ones, I love that they are handmade from all over the world!

I love their jewelry selection!

So much to love about Novica. I like their clothing - I have a beautiful sweater and a unique top from them.

The jewelry section is my favorite. I subscribed to your newsletter and Twitter followed.

I love both the necklaces and the wood sculptures :)

I love Novica. What beautiful, unique items! My favorite section, if I had to pick only one.. would be the jewelry section. I love unique, handmade jewelry.

My main e mail is angelatrenna {at} earthlink {dot} net if I get lucky and win!

And last but not least.. I am a confirmed email subscriber

Can you tell I really want to win this? Haha. Either way.. Have a wonderful and safe holiday! xoxo

Their jewelry section is great!

I love their jewelry department, especially the earrings!

I signed up for your newsletter.

Oooo, so much fun! I love their jewelry dept. :) Kit

My favourite section on their site is their Jewellery section. I shop for my sister for their site each christmas. She absolutely loves the products they carry.